Gaia Education’s online programme Design for Sustainability offers you an opportunity to learn practical effective ways to create the change we all seek in your community. The Ecological Design dimension of the course starts on 9 January 2023 and there are a limited amount of places left for this edition, so sign up now.

Assume that, all of a sudden, we were to awaken to the existential threat posed by our addiction to exponential growth as an economic prerequisite. What changes in our arrangements might, even at this late hour, offer some prospect of survival? It seems altogether obvious that it would involve some combination of bioregionalism, permaculture, and ecovillage design science. Frankly, I cannot imagine any alternative excluding those strategies that would remain viable for very long.

Suppose everyone in the world planted one tree every day. How long would it take to restore the carbon balance? My co-workers and I at the Global Village Institute for Appropriate Technology have done this calculation a number of different ways. The simple answer is that if everyone in the world planted one tree each day, by the end of the second year, the sequestered carbon would exceed current global industrial emissions. Atmospheric concentrations would begin to decline and return to normal. The principal obstacle is not lack of manpower, however, it’s the availability of land. Seven billion planters could plant the equivalent of global carbon dioxide emissions in two years, but they would use up all the fallow arable land in the world. Where do we send those tree planters after all the unused arable land is planted? Deserts cover a third of the earth’s surface. Climate change is causing deserts to expand at an accelerating pace; and yet, what is true about desertification affecting climate is also true about de-desertification.

By greening barren lands the hydrological cycle is restored, ecosystems are re-invigorated, and carbon is steadily removed from the atmosphere. “Here’s where we have to be thinking deeply”, Kansas farmer Wes Jackson says. “Agriculture had its beginning 10,000 years ago. What were the ecosystems like 10,000 years ago, after the retreat of the ice? Those ecosystems featured material recycling and they ran on contemporary sunlight. Humans have yet to build societies like that. Is it possible that embedded in nature’s economy are suggestions for a human economy in which conservation is a consequence of production?”

Jackson was mistaken. Humans have built societies in which conservation is a consequence of production. Ronald Nigh discovered one when he went into the Peten to study the Lakandon milpas. There, agroforestry combines trees and shrubs with annual crops and livestock in ways that amplify and integrate the yields and benefits beyond what each component offers separately. Like other methods of sustainable agriculture, the Lakandon’s is based on observing productive natural ecosystems and mimicking the processes and relationships that make them more resilient and regenerative. Nigh observed that under Lakandon management, through the propagation of fast-growing pioneer trees, canopy closure is achieved in two to three years rather than up to ten as described by ecologists. Bats and birds are attracted to these pioneer species and bring the seeds of more shade-tolerant trees. Though most Lakandon farmers would probably prefer to prolong the forest-growth stage for a few more years, the field is ready to be reconverted to milpa at around 12 to 15 years.

Why would the Lakandon farmers prefer to prolong the forest-growth stage? It is because that is the most productive part of the cycle when it comes to food, fibre, and animal products. The corn and beans are needed, but compared to the yields that come from mature trees, those corn crops are a lot more work. Their energy return on investment (ERoI) might be only 1.2:1 to 1.4:1, not nearly enough to create monumental architecture and elegant public arts and sciences. Parts of the traditional milpa practice are techniques that add to soil fertility. Small fires of moist weed piles build up char in the soil and prevent hotter forest fires that would leave only ash. Besides planting legumes, which contribute nitrogen and beneficial nematodes, the Lakandon are fond of the balsa tree, which drops rich leaf clutter favoured by soil microorganisms and whose star-shaped, aromatic blossoms attract birds, bees and bats. These pollinators transfer the seeds of food trees. Selective burning is a tool in the food-sustainability-kit that the last remaining 800 Lakandon Maya forest farmers in the Petén have saved from cultural extinction. 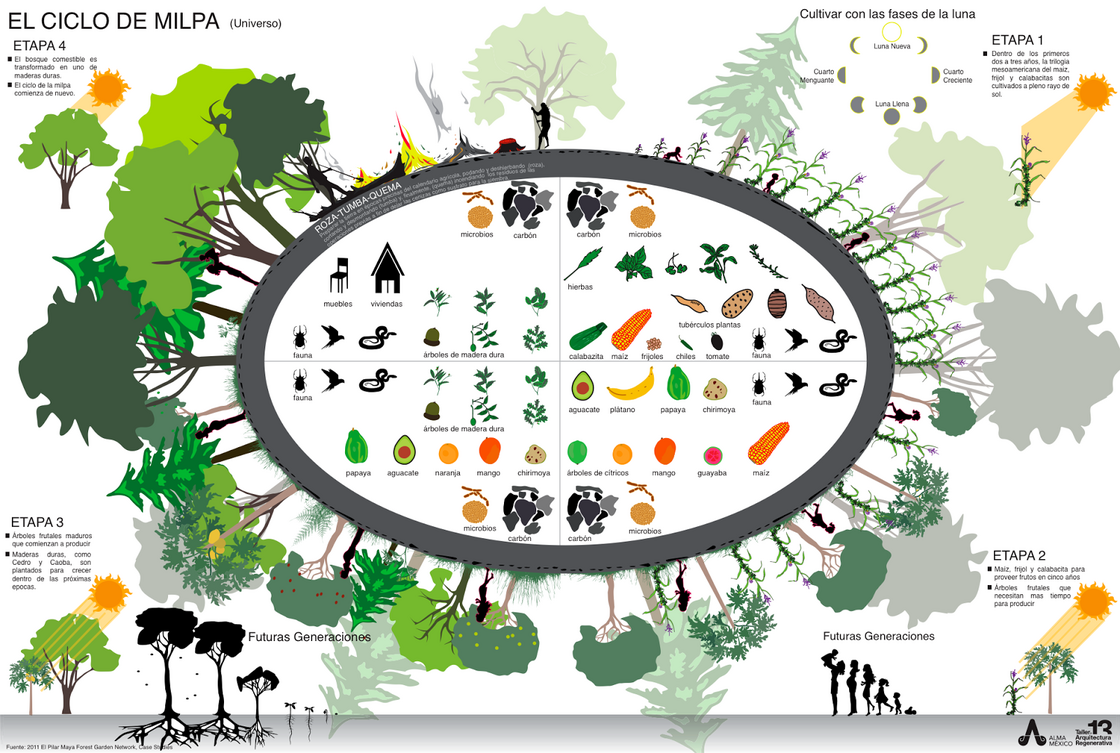 Near the town of San Pedro, Columbia, in Southern Belize, Christopher Nesbitt has been growing food crops in the ancient style at his Mayan Mountain Research Farm for over 20 years. He mixes some fast-growing native tree species, some annual crops, and some intermediate and long- term tree crops to build soil and produce continuous harvests. Some of his trees are leguminous and hold nitrogen by the microbial attraction of their roots. Some are pollinator-friendly and attract bees and hummingbirds to transfer the fertile pollen of important food plants. Understory trees like coffee, cacao, cassava, allspice, noni, ginger, neem and papaya benefit from intercropping with high canopy trees like breadfruit, açai and coconut palm, cashew, and mango. Fast-yielding crops like avocado, citrus, banana, bamboo, yams, vanilla, and climbing squashes provide an income for the farm while waiting for the slower harvest of samwood, cedar, teak, chestnut and mahogany to mature. 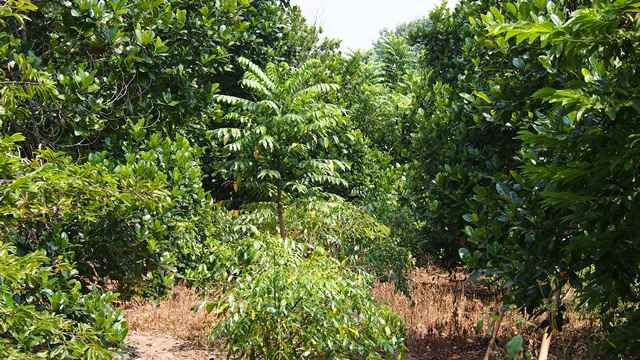 An example of a diverse Agroforestry landscape

The World Agroforestry Centre reports that farming methods like Nesbitt’s can double or triple food yields per acre while reducing the need for commercial fertilizers. If best management practices were widely used, by 2030 up to six gigatons of Carbon Dioxide Equivalent could be sequestered each year using agroforestry, an amount equal to the current emissions from global agriculture as a whole.

Permaculturalists are fond of saying that all of the world’s problems can be solved in the garden. Our obstacle is not gardening; it’s not even switching broadscale agriculture from ‘conventional’ (using chemical salts, herbicides, pesticides and machinery to derive the greatest dollar profit) to organic (marking ‘profits’ not in dollars but in the health and continued productivity of the soil food web). The greatest challenge is in changing the growth paradigm away from

Col. Edwin Drake’s remarkable discovery of a way to pump rock oil in the Seneca Nation permitted homo to dramatically accelerate Civilization 1.0 because of the sudden cheap supply of both energy and industrial chemicals. That innovation arrived precisely at the moment when coal smoke and horse manure were imposing severe constraints on both city size and war mechanization. With an ERoI of 30:1 to 100:1, petroleum allowed human eco-niche expansion to assume an exponential trajectory. Heck, we even aimed for the stars.

Mathis Wackernagel, Donella Meadows and others have calculated that Earth has been in deficit ecological spending ever since 1989–1990, adding stress and diminishing resilience with every passing year, so that by 2050, at present rates, we will be 34 planet years in debt (see graph). 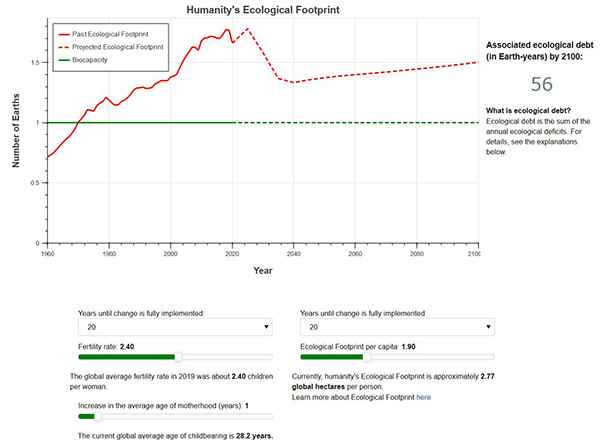 Looking ahead on the exponential economic decline curve, we can see that a seven per cent decline rate would mean halving every 10 years. A decline in our liquid fuel availability at a seven per cent rate would halve what is available to automobiles by 2020, and for that matter, halve production of automobiles. Absent organized rationing, it would likely halve production of tractors and fertilizers, and so, in all likelihood, halve available food production by that year. It would halve heating fuels, halve electricity, and probably halve the First World’s standard of living. It would certainly halve the value of many currencies and economies. If the decline were a mere 3.5 per cent, the halving time would extend out to 2040, but resource depletion being exponential, the curve inevitably steepens as time goes on. Descent might also be marked by stair-step plateaus, ‘green shoots’ to use the current parlance, punctuated by more breathtaking drops.

Our collective challenge is not gardening, bioregional reinhabitation or even restoring the climate. We know now that all of those are do-able. The challenge is to reform an economy based on exponential growth so that it functions well in an unrelenting pattern of decline and descent, a pattern that is at odds with our evolutionary experience and perhaps even our biological meta-program.

All of the necessary changes are not only do-able, they are being done in myriad ecovillages and many other communities and initiatives around the globe. A sustainable future, as best we can divine it, provides each requisite for human survival — food, shelter, heating and cooling, cooking, the daily activities of commerce and ennobling pursuits — but with a new, added mandate to separately or in combination sequester more greenhouse gases than we emit.

The suite of village and community self-audit tools provided by the Global Ecovillage Network offers helpful guidance and monitoring metrics. District heating from a local biomass or waste product, employing pyrolysing kilns that co-generate electricity while producing biochar, are already in prototype, marking a path to renewable, carbon-negative community housing, food and power supplies. Anticipating climate change, ecovillages and communities on six continents are constructing and occupying self-heating and self-cooling buildings, using materials with low embodied energy that absorb carbon from the atmosphere and provide more than mere warmth and shelter, but also nourish the souls of their inhabitants.

In the case of energy and transportation, we will, by fits and starts, switch to being entirely based on renewables, extracted in ways that are carbon negative when full life-cycle costing is performed and do not impose scandalously inequitable financial and toxic burdens on generations of newborn, millions of years into the future. Lower energy densities and higher distance costs suggest that bioregional re-inhabitation will become the rule, rather than the exception.

We don’t know exactly what our future built environments will look like, but we can make some educated guesses. They are unlikely to look like today’s Tokyo, Sao Paolo, or Shenzhen. More likely, they will resemble the description Father Gaspar de Carvajal, scribe to Francisco de Orellana, made of the net carbon-sequestering cities of the Amazon in 1542.

There were many roads here that entered into the interior of the land, very fine highways. Inland from the river at a distance of 30 leagues more or less there could be seen some very large cities that glistened in white and besides this, the land is as fertile and as normal in appearance as our Spain.

That passage could as well describe the vista that stretches now in front of us; the path we can take if we so choose: ecovillages, co-housing communities and other forms of living communally, practicing sustainable and regenerative, bioregionalist agriculture, in a permacultural landscape of cultivated ecologies, in millennial balance with the orbit and precession of Earth.

There are no comments yet. Be the first one to leave a comment!